Edu Marín, his brother Alex Marín and his father Francisco “Novato” Marín star in this documentary film that will not leave anyone indifferent.
Edu announced the conquest of the highest known roof in the world of climbing, Valhalla, located in the Great Arch of Getu, in China. This route surpasses all imagination. Its numbers can scare off anyone: 380 meters of climbing and 14 pitches, quoted as 7b +, 7a, 8a +, 7c +, 9a +, 8b +, 8a, 8c +, 8a +, 8b, 8a +, 8c +, 8a +, 8a +. Furthermore, 10 of these pitches are located entirely on the roof, 150m from the ground. Edu needed 9 hours to redpoint the 14 pitches and end up achieving the Marín’s greatest adventure yet.

During the presentation of the film’s trailer, Edu announced its premiere for October 2nd. The film will be available online for 48 hours, after a world premiere of guaranteed success. Don’t miss it out and buy the tickets for the premiere from  his website. 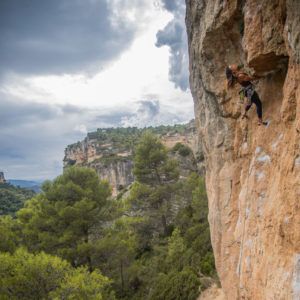 November 17, 2020 / 328
The day finally arrived!The shooting of the first professional commercial advertisement of Canigó Climbing. Yes, we are really excited about it, but that’s not all:... Continue reading